I have been reading through the book of Judges.  I typically read my Bible in the morning. I want to learn, I want to come away with something to apply to my life.  But, I have to admit, I have struggled with finding application in Judges.  I have been having a hard time figuring out just what it is that I am supposed to be learning as I have been working my way through this book.  There are some stories that just make me scratch my head.  Stories that leave me wondering, “why would they have done such a thing” or “what in the world is going on here.”  Well, this morning I finally finished Judges.  The last verse in the book of Judges reads, “In those days Israel had no king; all the people did whatever seemed right in their own eyes.”

It took a bit for the significance of that verse to start to settle in.  Of course, Israel eventually did get a king.  In 1 Samuel 9, Saul is anointed as Israel’s first king.  But before the prophet Samuel anoints Saul, he takes the people’s request for a king to the Lord.  God tells Samuel to go ahead and give the people what they want and in 1 Samuel 8:7 the Lord says, “…they have rejected me as their king.”

It is interesting.  I had understood the statement “the people did whatever seemed right in their own eyes” to simply be the effect of having no king.  It was also the cause.  God wanted to be their king.  He desired to lead them, to instruct them, to provide for them, and to protect them.  He was supposed to be their king, but in “choosing what was right in their own eyes” they had rejected Him.  As a result, they were left to be ruled by “whatever seemed right in their own eyes.”  Sometimes the consequence of rejecting God’s “kingship” in our lives is not getting to enjoy God’s “kingship” in our lives.

So, who will be king? No more king me. 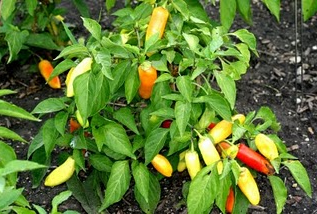 garden.  This year’s garden will include cucumbers, tomatoes, green beans, carrots, and lettuce.  The bulk of the space in my garden will be dedicated to my absolute favorite though, hot peppers!   I eat them on almost everything.  I will can some and freeze some and try to ration them out so I can eat them all year long.  Right now I am dangerously low.  I only have 1 jar left of last year’s peppers, but I have a plan.

This year I will plant more hot peppers because I want more hot peppers.  There is a direct correlation between how much I plant and how much I end up harvesting.  Pretty simple, right? It is a very obvious  relationship when discussing gardening but we sometimes lose site of this truth in other areas of our lives.  Besides holding true in my desire and quest for more peppers, it also holds true in my spiritual life.  What I sow will determine what I reap and how I sow will determine how I reap it.

I will invest more money, time, and energy in one area of my garden so that my harvest will be greater in that same area.

Tonight my wife and I will take a group of students who are graduating from high school out to dinner.   We will eat at a nice restaurant, then head to one of my favorite places for dessert.  After the eating is done we will reminisce and talk about our favorite memories over the last several years.  Camps, conventions, road trips, bon-fires, break-ups….. lots of memories.  At some point I will ask them what lessons they have learned as they worked their way through high school.  It is always interesting to hear what has impacted their lives and what truths they have managed to pick up along the way.  Sometimes I am thoroughly impressed with the wisdom that comes from some of these young men and women.  It seems to be evenings like the one I will enjoy tonight that remind me how quickly time passes.

They call it commencement but it’s not.  It’s really more of a continuation. Life has been underway for years now and it will continue to flow right by at a rate that, although  I know is steady, seems to always be picking up the pace.  Tonight I will tell them that.  Tonight I will also warn them, and remind myself, of the steady stream of distractions that will attempt to steal their focus from what really matters.  The longer I live, the deeper I realize the truth of what Jesus said in Luke 9.  In verse 23 Jesus tells the crowd that by attempting to cling to one’s life and seeking after temporary things, life will slip through your fingers and be lost. But if you would like to save your life, if you would like to find true life,  it’s accomplished by laying your life down for Him.